Mercury Makes News In Miami With The Loaded Harris!

The demo ride on the Grand Mariner began by uttering the common phrase, “Hey Siri,” and after asking the voice-controlled personal assistant to start the engines, the twin 300 V8s began to purr. How’s that for an advancement in technology! The simplified one integrated system made this Harris a popular choice for journalists during our weekend of testing. Technologies such as CZone digital control and monitoring truly simplify the operation of your pontoon. It gives you complete control of all electrical functions with the touch of a button. We were able to control the lights, stereo and other functions with ease. Plus CZone has a proven reputation for reliability with over 10 years of experience in marine installations.

Other key features on this Harris included Mercury’s VesselView, a multi-function display that has more information and data on boat and engine functions than you’re going to find anywhere else including rpm, speed, fuel flow and efficiency, temperature, trim and more. With direct integration into Mercury’s propulsion systems, VesselView has the ability to control the engine. Features such as trolling for fish, pulling tubers, adjusting skyhook, setting cruise control and others can be easily controlled from the VesselView screens. And if you’re not an expert, don’t worry. VesselView will make you feel like you’re one. And if that’s not enough, VesselView Mobile brings all that power to your mobile device as well as even more ways to stay connected. 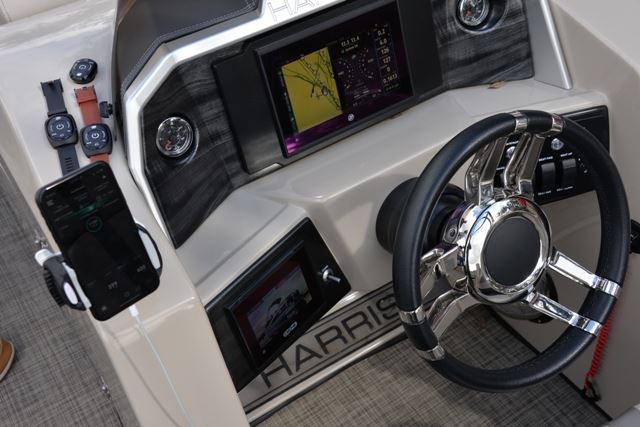 Another new technology we were able to experiment with on this pontoon came from a partnership with FELL Marine, a leader in marine wireless technology. Mercury Marine co-develops exclusive wireless and IOT connected products that seamlessly integrate with Mercury’s SmartCraft suite of digital technology and CZone digital switching, to make boating easier, safer and more enjoyable than ever before.

Utilizing a wearable FOB, in the event of a Man-Over-Board (MOB) situation, the engines turn off and an alarm sounds. Emergency contacts can also be programmed to be contacted after a specific time that you set, and another safety feature we like is the lights on the boat start blinking “SOS” as an added precaution. If it was a passenger who fell over, the engines can be started immediately to return to the location that was automatically marked on the screen.

The assisted docking system that is based on aerospace control systems and autonomous-car artificial intelligence, was another exciting announcement Mercury announced prior to the Miami Boat Show. At Lake X, the system was demonstrated on a Boston Whaler 330 Outrage with twin Mercury Verados and Joystick Piloting for Outboards.

Mercury collaborated with Raymarine to incorporate Raymarine’s DockSense system, which uses vision technology to sense and identify potential obstacles on the boat’s course, providing feedback to the Mercury autonomous system to allow the JPO system to respond.

“We’re able to provide a product that makes it simple and easy to dock a boat without hitting anything,” added Pfeifer. “This will ultimately turn into an automatic-docking product.”

It’s the industry’s first intelligent object recognition and motion sensing assisted docking solution, and with DockSense, it continuously monitors the vessel’s surroundings, keeping the autonomous system updated with real-time detection of objects like pilings or another vessel.

As journalists, we each took a turn attempting to run into a nearby dock or seawall, and the system simply overrides you and won’t allow you to do it. As we were just idling and talking, we got within the preset radius of a dock, and the engines automatically revved up and kept us at a safe distance. When we were ready to dock, we simply pressed a button to turn off the sensor on one side and then used the Joystick to perfectly line us up.

The DockSense system includes multiple FLIR machine vision cameras, a central processing module and the DockSense app running on Raymarine’s Axiom navigation display. It’s still being developed, but it does bring some excitement to what we can expect in the future.