RSS
By: CNN
Christopher Nolan's $150 million film "Dunkirk" may be the first that many Americans have heard about "Operation Dynamo," the beachfront rescue in 1940 of 338,000 Allied troops trapped between Hitler's army and the sea. But what most people probably don't realize is that a larger and faster maritime evacuation actually took place here in the States less than 18 years ago.
Three quarters of a century later, Dunkirk is getting its due. What continues to go largely unrecognized, however, is the spontaneous boatlift that came to the rescue when terrorists struck the US on September 11, 2001. As I reported in my book, crews aboard ferries, fishing boats, and tour boats joined mariners of all kinds to launch an unplanned maritime evacuation in New York Harbor that delivered nearly 500,000 stranded civilians off Manhattan Island in less than nine hours.

"I just turned my boat around," said New York Waterway ferry captain Rick Thornton, recalling the seconds after a fireball exploded from the side of the South Tower. Instead of making his scheduled run, he steered the ferry south. "I didn't call anybody on the radio, I didn't check in with anyone on board to say, 'I'm going offline.' ... My pure instinct was just to head downtown."

Before that morning, no federal, state, or city agency had foreseen the need to evacuate Lower Manhattan, so no plan existed for doing so. At 8:46 a.m., when thick gray smoke started rolling through the airplane-shaped hole in the North Tower, an estimated 16,400 to 18,800 civilians were present in the World Trade Center complex, with many more in the surrounding homes and businesses.

Lower Manhattan's daytime population totaled in the hundreds of thousands that morning. Transportation shutdowns began within one minute after the first plane hit, restricting people's ability to freely navigate around and out of a suddenly changed city.

As the scope and scale of the calamity unfolding at the World Trade Center escalated, city and state police collaborated with municipal agencies to put Manhattan on lockdown, halting buses, subways, and commuter rails, as well as closing roadways, bridges, and tunnels to prevent further attack. But sealing off the city also prevented people from leaving. All the while, conditions grew worse.

From aboard a Coast Guard search and rescue boat, Boatswain's Mate 3rd Class Carlos Perez saw through binoculars the "horrific silhouette images" of people jumping to escape the unendurable situation inside the towers. "The worst feeling as a first-responder in any capacity," explained Perez, "is being on a scene of distress and not being able to do anything about it." This sentiment, shared by countless mariners as they began mustering on Manhattan's shores, was the driving force that propelled so many into action. And then the first tower fell.

At 9:58 a.m., a plume of gray-black smoke mushroomed up as the South Tower crumbled down. The wave of dust blanketed the surrounding neighborhoods. People caught in the mass struggled to draw breath. In an instant, the scale of the disaster had magnified.

Scrambling to get out of the city by boat

Like the soldiers on the sands of Dunkirk, civilians in Lower Manhattan ran until they ran out of land. Meanwhile mariners raced to meet them all along the shoreline. They nosed their boats in to the sea wall and pulled into every available slip to rescue the hordes of fraught, powder-plastered people. "Gray ghosts." That's what they looked like to NYPD police boat pilot Tony Sirvent.

"We had like Noah's Ark," recalled Sirvent crewmate, NYPD Officer Tyrone Powell. "We had everybody on that boat. We had animals. We had babies without parents. Everybody was covered in soot."

Desperate to get off the island, people stacked 10 or more deep against the railings along the water's edge. Stranded civilians caught in an act of war scrambled to climb, jump, or crawl across ladders to board any available vessel. 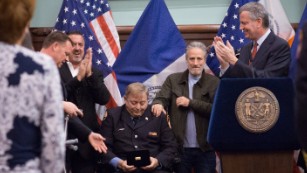 Some even plunged into the water, unprepared for the perilous harbor currents that swiftly pulled them out toward the sea. An untold number of water rescues were performed that morning by mariners who put to good use their monthly "man overboard" drills.

What had begun as a sort of expanded ferry service had transformed into a full-blown rescue. By nightfall, approximately 150 different vessels, crewed by an estimated 800-plus mariners had executed a successful boatlift, with surprisingly few incidents or serious injuries. Yet, even as we approach the 16th anniversary of the terrorist attacks, this homegrown Dunkirk still remains far less reported than its 77-year-old counterpart.

The circumstances of these two large-scale evacuations were, of course, quite different. While Britain's mariners had to cross 39 nautical miles of English Channel to reach the north coast of France, New York harbor vessels didn't have nearly as far to go. They converged from points across the port and came in from Long Island to offer their assistance. The majority of boats simply crossed the mile of Hudson River back and forth to New Jersey, dropping off passengers at ferry terminals in Weehawken, triage centers in Jersey City, and slips in parks, marinas, and yacht basins, as well as makeshift docking points all along the New Jersey waterfront.

The scope of the Dunkirk evacuation was quite different.

In May of 1940, two weeks after Germany invaded Belgium, France, Luxembourg, and the Netherlands in World War II, Allied forces had retreated to the beachhead in the French coastal city. Evacuation by water offered the only hope of survival, but was hindered not only by German airstrikes targeting British naval vessels but also a lack of smaller boats that could board passengers in the shallow waters just off the beach. Across the English Channel, military leadership organized a massive boatlift, calling for vessels of all sorts to participate in the evacuation.

And over the course of nine days, between May 26 and June 4, more than 800 fishing smacks, and other boats set out to bring the troops home, some with civilian sailors at the helm but most manned by Navy personnel or delivered under tow. These "little ships of England" played a significant role in what was then the largest maritime evacuation in history.

Another difference between these two landmark evacuations came in planning, or lack thereof. In 1940, the rescue fleet was assembled and deployed using a battery of telephones to call boat owners and prospective volunteers. In 2001, on the other hand, the boatlift began completely spontaneously as crews saw the unfolding disaster and navigated toward it, hours before the Coast Guard issued a call for "all available boats" to join the evacuation. Mariners applied not only their equipment, but also their training, rooted in the longstanding and deeply ingrained tradition of aiding those in peril.

Unlike the mariners at Dunkirk, whose ranks included some unarmed volunteer sailors, those delivering people from Manhattan weren't subjected to enemy fire. But they did have to fear the prospect of more attacks as rumors about bombings and unaccounted-for planes continued to fly. When helmsmen and women set their course toward Lower Manhattan, they could not be certain what second- and third-wave assaults might soon follow. As it turned out, the most menacing hazard was actually the dust, which not only created whiteout conditions that left captains navigating by radar alone, but also began a years-long process of illness that would, for some mariners, contribute to an early death.

"We were covered in dust," said then-New York Waterway Port Captain Michael McPhillips. "The radar couldn't see through the dust. ... We were pulling into the dock blind."

It's impossible to know exactly how many of the mariners who participated in the evacuation wound up suffering from illnesses related to their service. At least 120 ferry captains, deckhands, and mates are registered with the World Trade Center Health Program (WTCHP), with 53% of those suffering from at least one illness or condition that doctors and researchers believe to be related to World Trade Center exposures. McPhillips is among them. Forced to retire from maritime work, McPhillips now works for the FealGood Foundation, an organization that provides medical and financial assistance to ailing first responders. He counts three ferry captains from his former company that he says have died from September 11-related health issues. At this time the WTCHP does not keep a tally of such deaths, and so the total number remains unknown.

What we do know is that maritime workers of all stripes set out, heading straight toward Ground Zero. Instead of fleeing, or remaining in locations safely removed from the chaos unfolding across the harbor, they recognized the fact that they had the wherewithal to help, so they helped.

The story of the September 11th boatlift highlights the reflexive human compulsion to aid others that arose in the aftermath of the deadliest terrorist attacks on US soil. That day, a series of lifesaving, selfless acts performed by everyday people transformed New York into a place of hope and wonder. Today these acts, offering up a striking example of community, compassion, and comity, remind us of the resourcefulness and resounding human goodness that inevitably rise up in the face of darkness and calamity.

Pontoon Depot's family would like to say a warm thank you to all that helped that day and to all the fallen during those attacks and in the war's that followed.